“A blistering account of the things that we will do to save our own skins, and the way the human heart betrays us. It says a great deal about the systems and structures of new writing in UK theatres that Grochala’s nugget of a play has been lying around for two years unproduced. At its best it reminds us of Pinter and Bond… the writing is grimly uncompromising and delicate in the way it depicts a world in which those who grovel become those who stamp in a never-ending cycle of power-grabbing and blood-letting.

Stephen Keyworth’s production is taut and controlled, and there is some thrilling acting, particularly from Pippa Nixon as the disillusioned May, who realises she has given all for nothing, and former EastEnders actor Brooke Kinsella reveals hidden depths as June.”

“Taut direction from Stephen Keyworth racks up the terror – silences are deftly held, and, in one of the most shocking but visually arresting scenes May watches as her cousin is suffocated with a plastic bag. It’s harrowing stuff, but a pertinent reminder of individual responsibility in faceless terror.”

“Gripping…Brooke Kinsella brings fierce commitment to her role as the photographer’s assistant.”

“Moving and electric in its intimacy. The set and staging are simple and effective and compliment the directness and honesty of the writing itself…. Some of the play’s most affecting moments are when we are granted a brief glimpse of the tenderness and decency in these hardened characters.”

“An emotionally gut wrenching production at Finborough theatre… Pippa Nixon brings a taut strength to May which melts beautifully into a hopeful idealism and Brooke Kinsella is both hateful and pitiable as the cold June.”

“Stephen Keyworth’s production is tight and sharp, and the performances are impressive, with Pippa Nixon as the intense, troubled May and Brooke Kinsella as the pretty but hard-faced June. The remainder of the ensemble work swiftly to flesh out those haunting, anonymous photographs and give us a feeling for the real people who found themselves plunged into a horrific nightmare.”

“A well-crafted, disturbing portrait of how far a human can bend under the threat of death… Nixon, especially towards the closing scenes of the play, layers an emphatic performance with humanity. Bullish, scheming, and quite uncompromising, Kinsella has an instinct for creating a sympathetic monster while Tom Reed as Col throws emotional gunpowder into this already incendiary mixture to bring the story to its bleak denouement…Dark material, indeed.”

“A hard-hitting and thought provoking sixty five minutes of theatre… Director Stephen Keyworth has created a fast, passionate, intense and emotionally draining piece of theatre; at every moment the stakes are as high as they can be.”

“Starkly humorous…There’s not an ounce of spare flesh on Thorne’s treatment of a subject that could tempt many playwrights into rhetorical flat. The dialogue is never less than deftly sketched…this excellently acted production can’t be faulted..”

4 Stars – Time Out, Critics Choice & Show Of The Week

“Thorne’s writing is relaxed, natural, as is Keyworth’s direction. Very seldom indeed are we reminded that what makes this scene remarkable is that it involves the child murderer Mary Bell. Christopher Daley and Simon Darwen are immensely appealing as the soldiers; Diana May is pitch-perfect as the confident Lucy. What emerges unmistakably is that Mary Bell is a supporting character in her own life story, and anxious to be so.”

“Director Steve Keyworth has the deftness to keep us conscious of what Mary has done, even as the play gives a tentative, flickering sense that a second chance just might be possible for her. There’s some shrewd acting from Diana May as Mary’s prison chum, and from Christopher Daley and Simon Darwen as two squaddies on the pull. But the performance that makes it all work is Elicia Daly’s. Playing Mary, her little almond-shaped eyes, disconcertingly sharp and poignant by turns, are a documentary in themselves.”

3 stars – Guardian, Pick Of The Week

“Written with gritty economy and served by excellent performances… Beautifully directed by Stephen Keyworth, it expertly skips between scenes in Mary’s troubled childhood before showing us the woman she’s become after more than a decade in prison.”

“Jack Thorne’s sensitive and moving character study in unlikely subjects is given as fine a production as could be asked for… directed with exactly the right gentle touch by Stephen Keyworth.”

“”The very constraints of this space – literally an elevator with two sets of sliding doors – fuel the imagination. And when the audience, which never numbers more than a dozen, is standing shoulder to shoulder with the actors, there is no room for sloppiness or short-cuts. Even the weakest show has a rare and thrilling intimacy.

This is especially true when the standard of acting is so very high. I’ll be happy if I don’t see performances better than those of Sheena Irving and Elicia Daly in Fanny & Faggot for the rest of the Fringe. Better still are the same two actresses, along with Charlotte Palmer, Fiona Paul and Felicity Well, in the utterly superb Patricia Quinn Saved my Life.

It’s not just the nerve of staging a play for five players in such a miniscule space, it’s the hilarious and joyful exuberance of the performances that will keep you smiling for the rest of the week… Unless you’re claustrophobic or unsteady on your pins, I can’t recommend it enough.”

“To describe the Lift as “intimate” doesn’t really do it justice. This is a space where the traditional boundaries between performer and audience are completely, unavoidably, broken down. In most theatres, you can behave very much as you would at the movies: sit back, enjoy the show and clap at the end if you feel so-inclined. Here, you’re on stage with the performers so you become part of the action. If you get in their way, the actors will ask you to move, and if they want you to join in with the show you don’t have much choice in the matter. There’s something primal about the experience – this is what theatre must have been like before anyone thought to give it a name.”

“Utterly superb…It’s the hilarious and joyful exuberance of the performances that will keep you smiling for the rest of the week.”

“Carr’s script is gloriously silly and cast of five have as much fun as the audience.

The Aquatic Ape by Joy Wilkinson

“I hoped this would be good but I was surprised – in fact, it is outlandishly brilliant. It is well written, sparky, clever and funny and the cast seemed to delight in performing while the rest of us could not stop laughing.”

“An excellent production of an entertaining script. Intelligent, well timed performances. Wilkinson’s script is a darkly comic affair that never loses sight of the hope and tragedy in their relationship.”

Aliens Are Scary by Stephen Keyworth

“Aliens are Scary is more poignant in its ridiculousness than one might at first expect. But don’t be fooled, this show is light-hearted and comical. It’s a wonder the actors are able to keep a straight face!”

“A hilariously funny parody of all things American.”

The Amazing Adventures Of Schrodinger’s Cat by Stephen Keyworth

“Written and directed by Amnesty Award winner Stephen Keyworth, and another example of the high quality theatre that’s overloading the lift this year… Ian Pringle is excellent as the self-doubting fumbling physicist and Lulu Rafique makes a fantastic feline with a deliciously sleek and purring voice. Up close and personal, you have got to love the Lift.”

“Inspired by the discovery of a Kosovan refugee found beaten to death in London’s St James’s Park… There are strong performances from all and interesting casting with one of the refugees played by an Irish actor – drawing parallels with the not-too-distant history of the treatment of Irish immigrants in Britain. A compelling piece of theatre.”

“It’s not often that a food fight turns into war, but in Stephen Keyworth’s intelligent new play, Dog Well Done, selling hotdogs from a cart in a London park amounts to nothing short of a military operation… Eking more meaning from a sausage than would ever have been thought possible, the hotdog becomes an unlikely symbol for cultural difference and the indifference of a system that lets people work all day and yet still sleep rough at night. The play’s message is clear: it’s a hotdog eat hotdog world.”

“A hilarious piece of poignant political satire. Keyworth and the 14-strong cast handle the mix of humourous absurdity an ruthless pursuit or wealth and influence with slick professionalism. An inspired choice. Expect to be impressed.”

Who’s Afraid Of Virginia Woolf? by Edward Albee at The Green Room, Manchester

“A perception that ought to be beyond their years. Peter Davies as George, Debbie Chazen as Martha, James White as Nick and Georgie Morgan as Honey are directed by Stephen Keyworth. He has encouraged them to give intelligently detailed performances and sustain them through the play’s great length.” 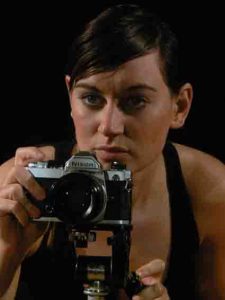 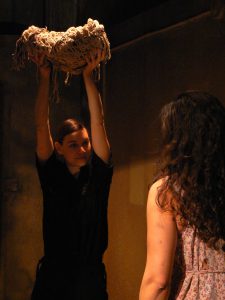 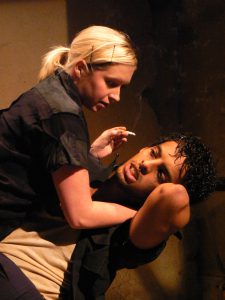 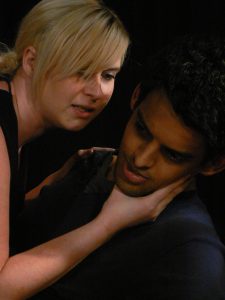 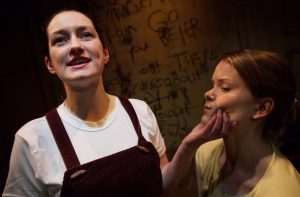 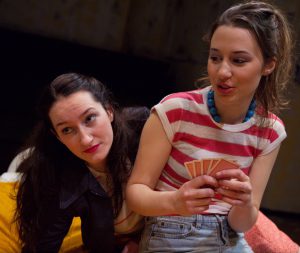 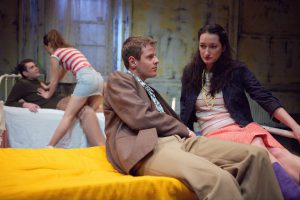 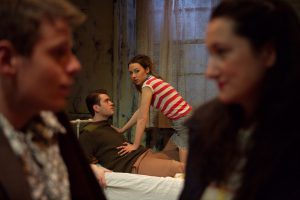 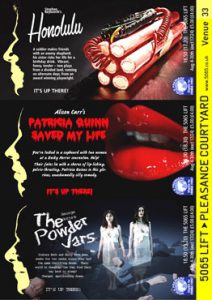 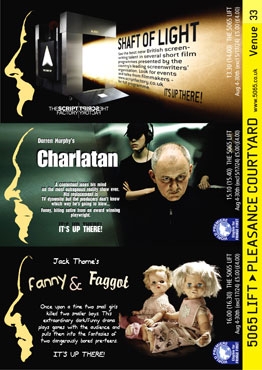 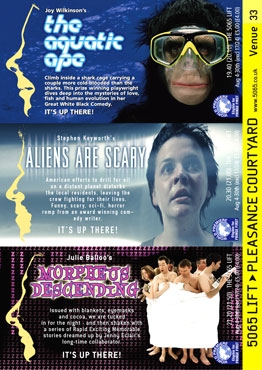 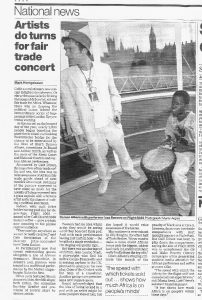 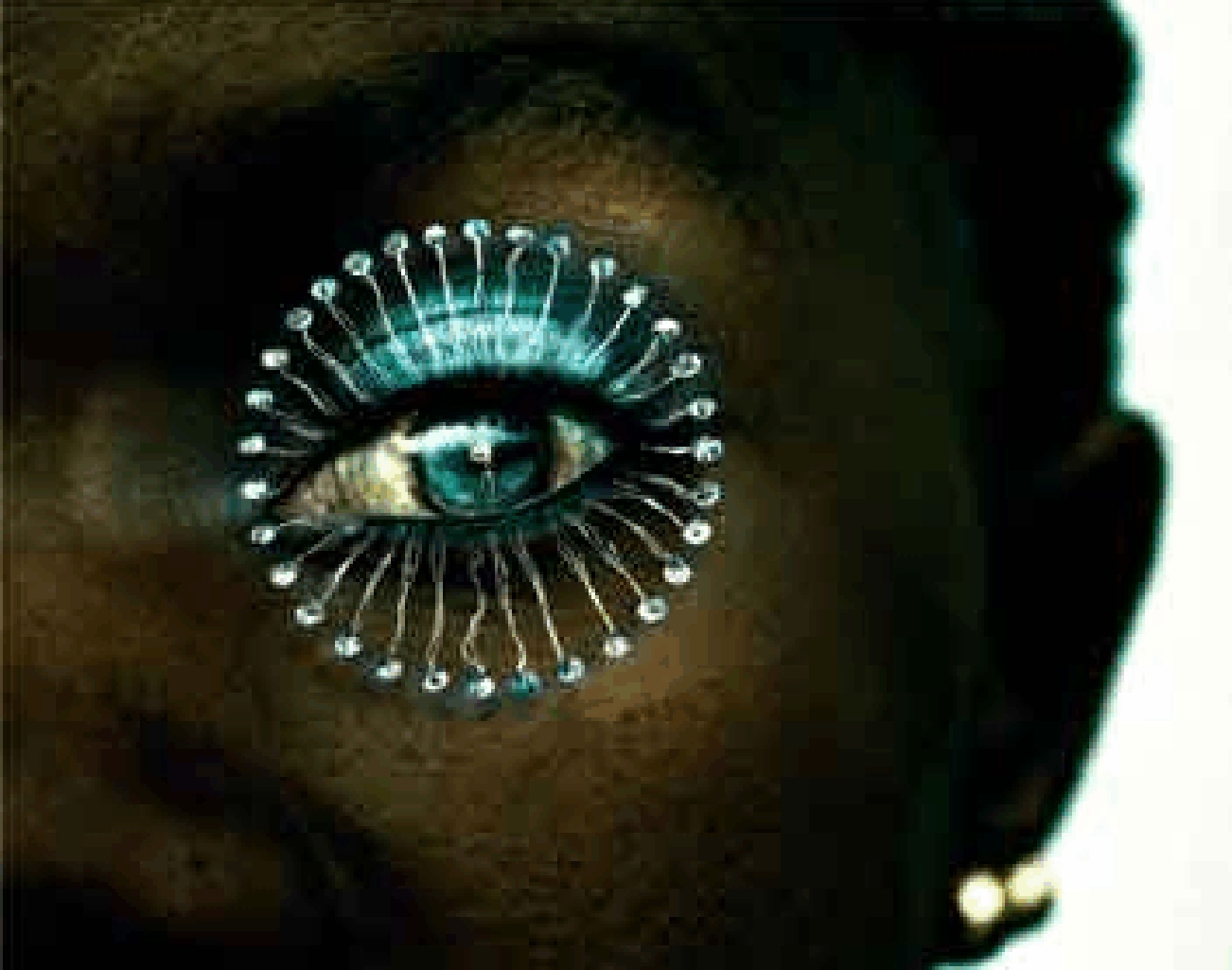